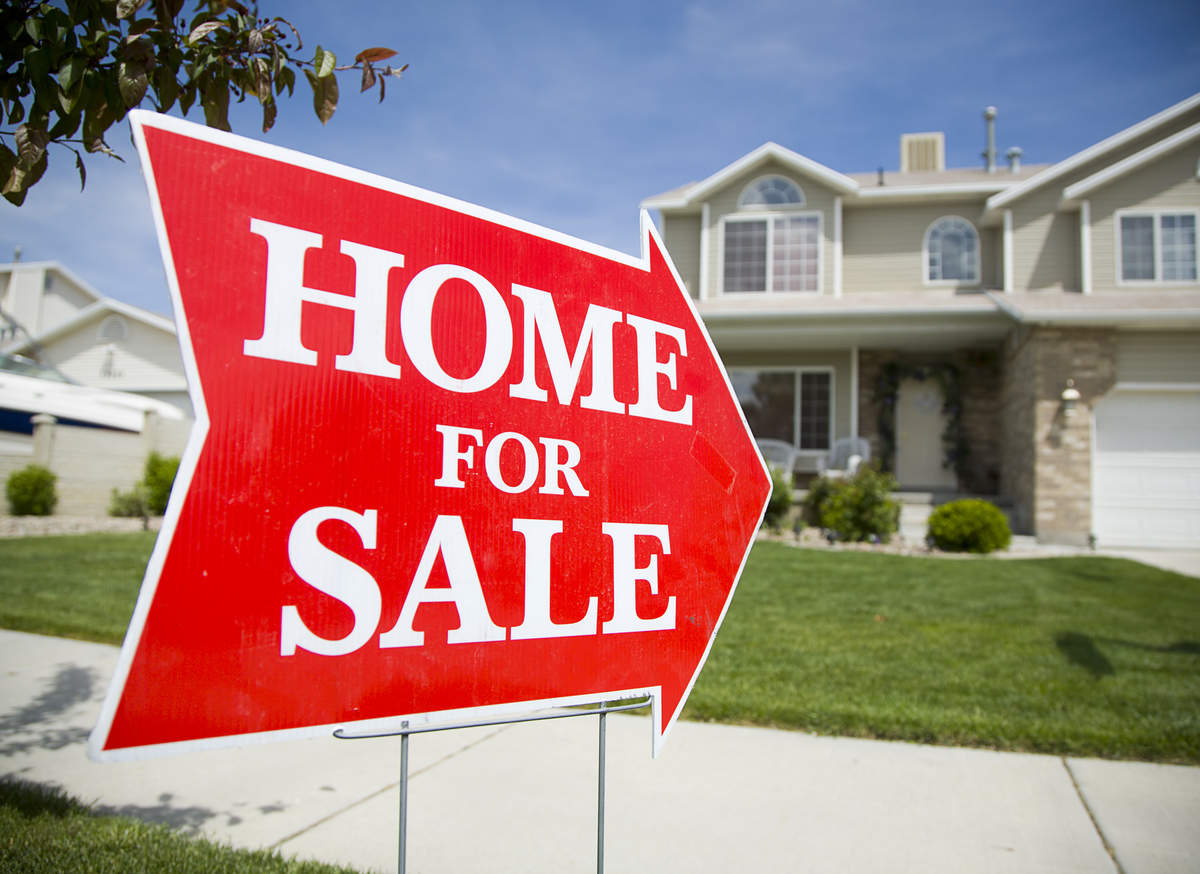 WASHINGTON: Sales of new U.S. single-family homes increased more than expected in January, boosted by historically low mortgage rates and an acute shortage of previously owned houses on the market.

The report from the Commerce Department on Wednesday suggested the housing market would continue to underpin the economy’s recovery from the COVID-19 recession. Momentum could, however, ebb in the near term after winter storms wreaked havoc this month in Texas and large parts of the South region.

Higher house prices because of the tight inventory resulting from lack of land and very expensive lumber could push homeownership out of the reach of many first-time buyers.

“There is an insatiable demand for homes right now, and it can’t be met by resales of existing homes, so people are signing contracts for new homes,” said Holden Lewis, home and mortgage expert at NerdWallet.

The median new house price increased 5.3% from a year earlier to $346,400 in January. New home sales are drawn from a sample of houses selected from building permits and tend to be volatile on a month-to-month basis. New home sales surged 19.3% on a year-on-year basis in January.

Sales increased in the South, Midwest and West, but declined in the Northeast. They were concentrated in the $200,000-$749,000 price range. Sales below the $200,000 price bracket, the sought-after segment of the market, accounted for only 6% of transactions last month.

Stocks on Wall Street were trading higher, with the PHLX housing index outperforming the broader market. The dollar gained versus a basket of currencies. U.S. Treasury prices were lower.

The National Association of Realtors reported last week that the supply of previously owned homes available for sale plunged to a record low in January. That has pushed buyers toward the market for new homes. Demand for housing is being driven by Americans seeking more space for home offices and schooling as the year-long coronavirus pandemic drags on.

Though mortgage rates have risen in recent weeks in tandem with U.S. Treasury yields as investors anticipate stronger economic growth and higher inflation, the 30-year fixed rate remains well below 3%.

A separate report from the Mortgage Bankers Association on Wednesday showed applications for loans to buy a home decreased 12% last week from a week earlier. Mortgage loan applications were 7% higher compared to the same period last year.

Economists believed the week-to-week decline in applications reflected disruptions caused by the snow storms, which left large swathes of Texas in the dark and without water supplies.

“We would expect a bounce-back over the next few weeks as activity resumes,” said Veronica Clark, an economist at Citigroup in New York. “Housing sector activity should continue to be supportive of GDP growth at least through the first half of 2021.”

Housing and manufacturing have outperformed other sectors of the economy during the pandemic. The government reported last week that building permits soared in January to their highest level since May 2006. But expensive inputs and lack of land pose a threat to continued robust housing market gains.

According to a survey of single-family homebuilders this month, record-high lumber prices were “adding thousands of dollars to the cost of a new home and causing some builders to abruptly halt projects.” Softwood lumber prices jumped by historic 73% on a year-on-year basis in January.

“Strong demand, a shortage of supply and rapidly rising prices is the perfect combination of factors that should convince builders that now remains a really good time to get the shovels in the ground,” said Joel Naroff, chief economist at Naroff Economics in Holland, Pennsylvania. 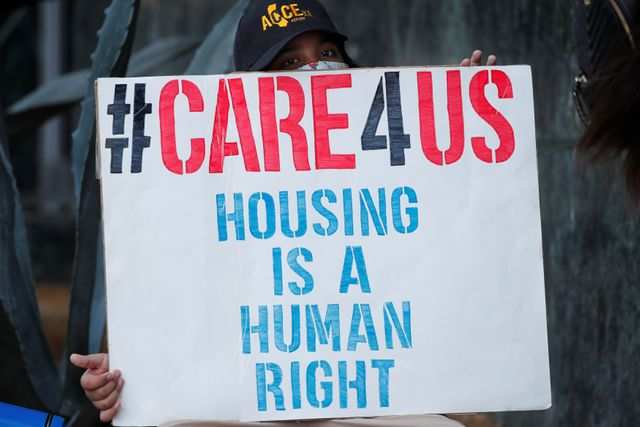 LOS ANGELES: Without a job and terrified of being left homeless during the coronavirus pandemic, Manuel Acero had no other option but to enlist in the US Army.

His distraught wife Ady Carrillo stayed behind in the studio apartment they rented in Los Angeles, but the 48-year-old isn’t just awaiting his return home — she’s taking action.

Carrillo has joined the “Cancel Rent” movement, which is gathering steam with protests across the United States as Americans hit hard by the coronavirus pandemic pile up debts.

Activists want landlords to suspend rent obligations for those in the most dire straits, having lost their jobs in the economic chaos sparked by the virus crisis.

Like the 31-year-old Acero, who is now at boot camp, many have been forced to resort to extreme measures.

“It’s been three months since we were able to make rent — the only choice my husband had left was to join the army,” Carrillo told AFP, bursting into tears.

“I’m scared they’ll send him away from me” on an overseas deployment, she said. “If he dies, I die with him.”

– Housing as ‘human right’ – With tens of millions of Americans out of work because of the pandemic, federal, state and local authorities temporarily suspended evictions on tenants who cannot make rent.

But many worry about what happens when those concessions run out.

Over the past week, the Los Angeles County Sheriff’s Department has resumed evictions ordered before March when the lockdowns began, local media have reported.

In the city’s Chinatown neighborhood on Monday, a small group of protesters including Carrillo rallied and marched on City Hall, demanding answers.

Los Angeles has the sixth-highest rents in the country, according to a ranking by the real estate site Zumper, trailing behind cities like San Francisco and New York.

“It’s been so hard for me to make rent during the pandemic,” said Rosa Hernandez, who also attended Monday’s rally.

– ‘We are not going to pay’ – Demonstrations and “rent strikes” by the “Cancel Rent” movement have been staged in various cities across the country since the start of the virus epidemic, which has so far left more than 164,000 Americans dead.

“We are not going to pay,” said Lydia Nicholson, an organizer of the LA Tenants Union.

“I don’t think it’s going to be pretty at all for anyone if they make us do something that we just obviously can’t do.”

Los Angeles prosecutors have said large-scale rent forgiveness is out of the question, and would cost the city more than $1 billion in compensation to landlords, according to a memo seen by the Los Angeles Times.

Mayor Eric Garcetti’s office did not respond to an AFP request for comment for this story.

For their part, landlords say freezing rents would not only affect the upkeep of their properties but would also impact the payment of taxes, which are key to the city budget, as well as mortgages.

Suspending rent payments is “just shifting the debt up the food chain,” said Jay Martin, director of a group that represents owners of rent-controlled properties in New York.

He said that many landlords “are working with [tenants], they are forgiving parts of the rent.”

“A tenant that can pay partial rent is better than a tenant who can pay no rent,” Martin said.

But the situation only appears set to get worse as federal supplementary support of $600 a week for the unemployed has now expired.

“I’ll have to go sleep under a bridge,” said Joaquin Gutierrez, 63 who has been out of work since February.

Gutierrez had been planning on returning to his native El Salvador when the coronavirus broke out and left him stranded in the United States.

Now, he does not have money to buy food, much less the $500 needed to pay the rent on his room in LA’s Van Nuys neighborhood.

“The only solution is for me to leave,” Gutierrez said, calling on the government of El Salvador to repatriate him.