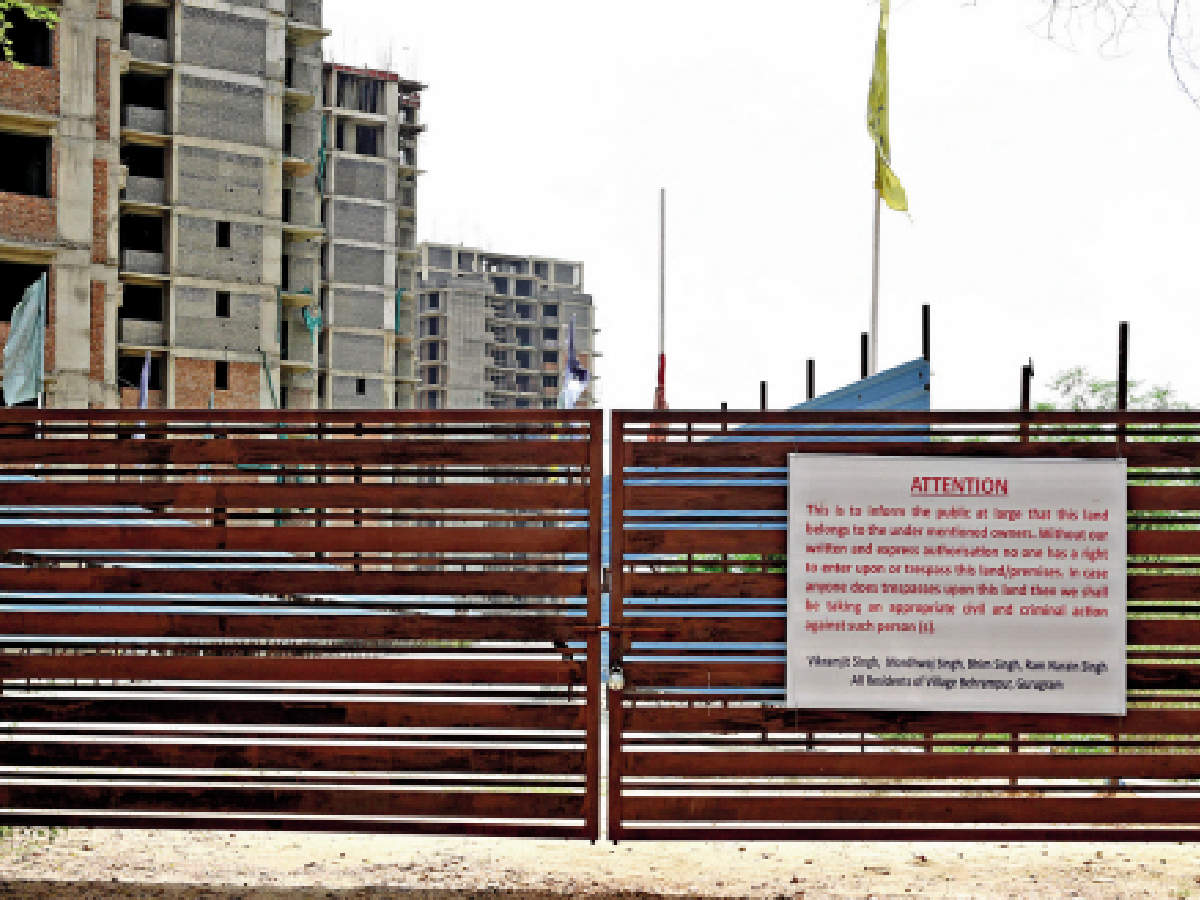 GURUGRAM: When Nitesh Mishra booked a flat in Canary Greens project of Today Homes in Sector 73 nearly 10 years ago, he hoped to give his family a slice of the good life. But the wait seemed interminable. In October 2019, when the developer filed for bankruptcy, Mishra and nearly 500 other buyers thought they had seen the worst.

Then came Tuesday, August 11. That morning, a group of villagers, from whom Today Homes got land, took physical possession of the project and put up a notice at the gate of the nearly fully booked but incomplete housing society proclaiming the land was theirs and anyone entering the compound without their permission will be trespassing.

The original owners, all residents of Berhampur village, contended they had collaborated with the developer on the project under which Today Homes was to build a condominium on half of the 20-acre land and residences for them on the remaining portion. The land is still registered in the villagers’ names. The interim resolution professional (IRP) appointed by the National Company Law Tribunal, where the insolvency case was filed in 2019, has filed a police complaint.

“We have been running from pillar to post for the past four or five years to get justice, but all our complaints to different agencies have fallen on deaf ears. We were supposed to get possession in 2014, but we are still waiting for our homes. Now, the so-called original land owners have taken possession of the incomplete project,” said Mishra, general secretary of Canary Greens Buyers Welfare Association (CGBWA).

The homebuyers claimed the developer had collected around Rs 500 crore from them. “The sequence of events strongly indicates it was all pre-planned. The promoters have siphoned off all our hard-earned money,” said CGBWA president Rajeev Goel. Of the 583 flats in the project, around 520 have been sold, he added.

The land owners said that according to the agreement with the builder, the latter was supposed to acquire the licence, pay all government fees and develop the project in Behrampur, now Sector 73.

“We went into arbitration when the developer failed to fulfil its promise and got a decision in our favour in December 2017. It was challenged by the developer in a Gurugram court and in February, the court’s decision came in our favour. The land is still in our names,” said Siddarth Rao, one of the owners. On the fate of the buyers, he said, “We have not sold any flats to anyone. They should file a case against the builder.”

Nilesh Sharma, the IRP for Today Homes, said land owners had voluntarily entered into a ‘development agreement’ with the builder and also executed an irrevocable power of attorney.

“Rights for marketing, promoting and selling of flats were also given to Today Homes under contractual terms. Later, in complete violation of the contractual obligations, the land owners revoked the power of attorney and thereby breached the agreed terms and conditions,” Sharma said, adding that he had filed a complaint with police for registration of an FIR.

Gurugram police spokesperson Subhash Boken said issues related to the project were pending before different courts. “Police are verifying the facts,” he said.