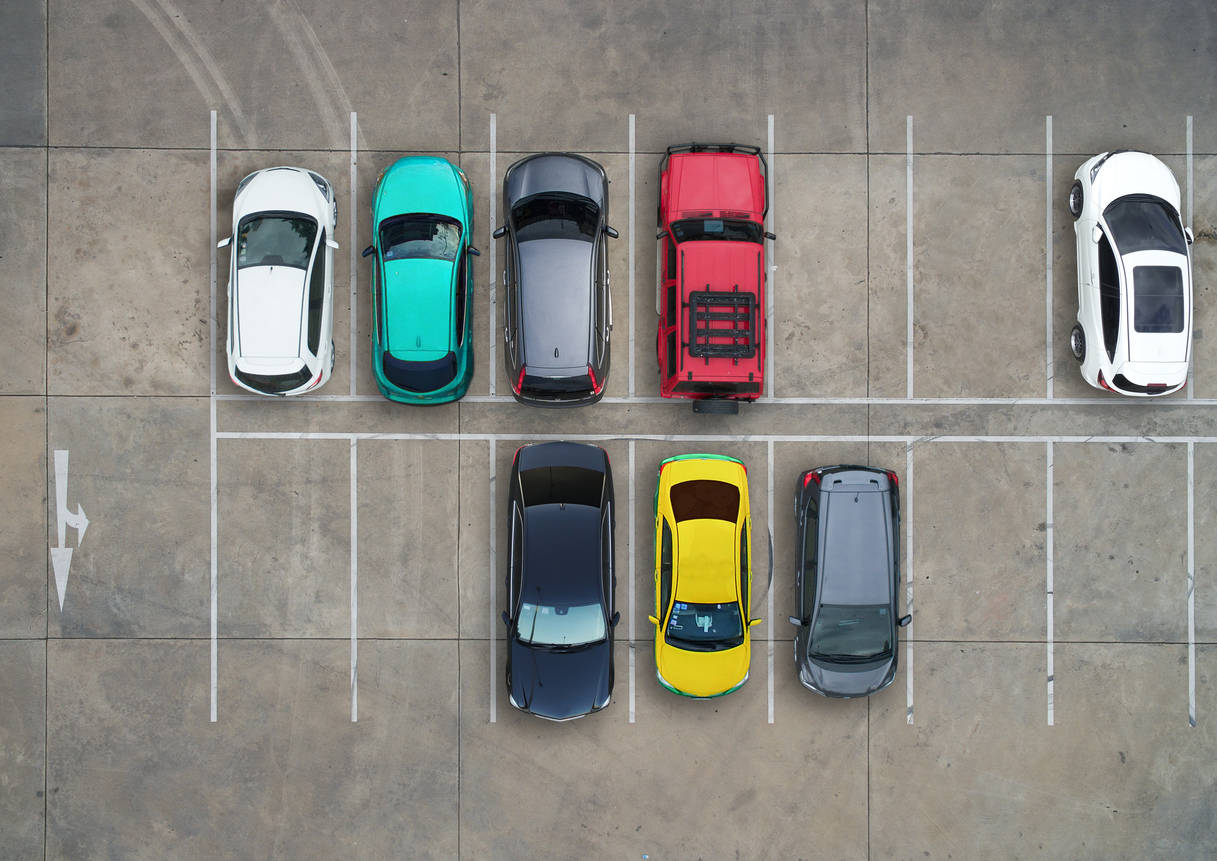 BENGALURU: The yet-to-be-held elections to the Bruhat Bengaluru Mahanagara Palike (BBMP) may pose a challenge to the smooth implementation of Parking Policy 2.0 of Bengaluru, which was recently approved by the state government. Some legislators believe the plan to collect annual permit fee for parking in residential areas might receive backlash from people. This, they say, could also hamper the winning prospects of the ruling party in the state government.

On Thursday, Deputy Chief Minister CN Ashwath Narayan also stated that the government is not planning to implement the new parking policy immediately. “Experts have suggested imposing a heavy parking fee to reduce traffic congestion and thereby attract people towards using public transport. We will implement the policy only after examining both pros and cons,” he said.

Besides the annual permit system in the residential layouts, the policy also proposes to introduce pay and park system on almost all public roads where people are currently parking without paying a fee.

NR Haris, MLA from Shantinagar said the residential parking fee system is difficult to implement. “It makes no sense to charge for parking in front of someone’s house. What the government must first do is implement pay and park system in the commercial areas,” he said. He also wanted the government to increase investment in public transport so that people have an option to stop using personal vehicles. “Lack of public transport system is the key reason for the drastic increase in personal vehicles,” the legislator from the Congress party said.

Uday Garudachar, MLA of Chickpete, who represents the ruling Bharatiya Janata Party, said pay and park system is a step in the right direction but difficult to implement. 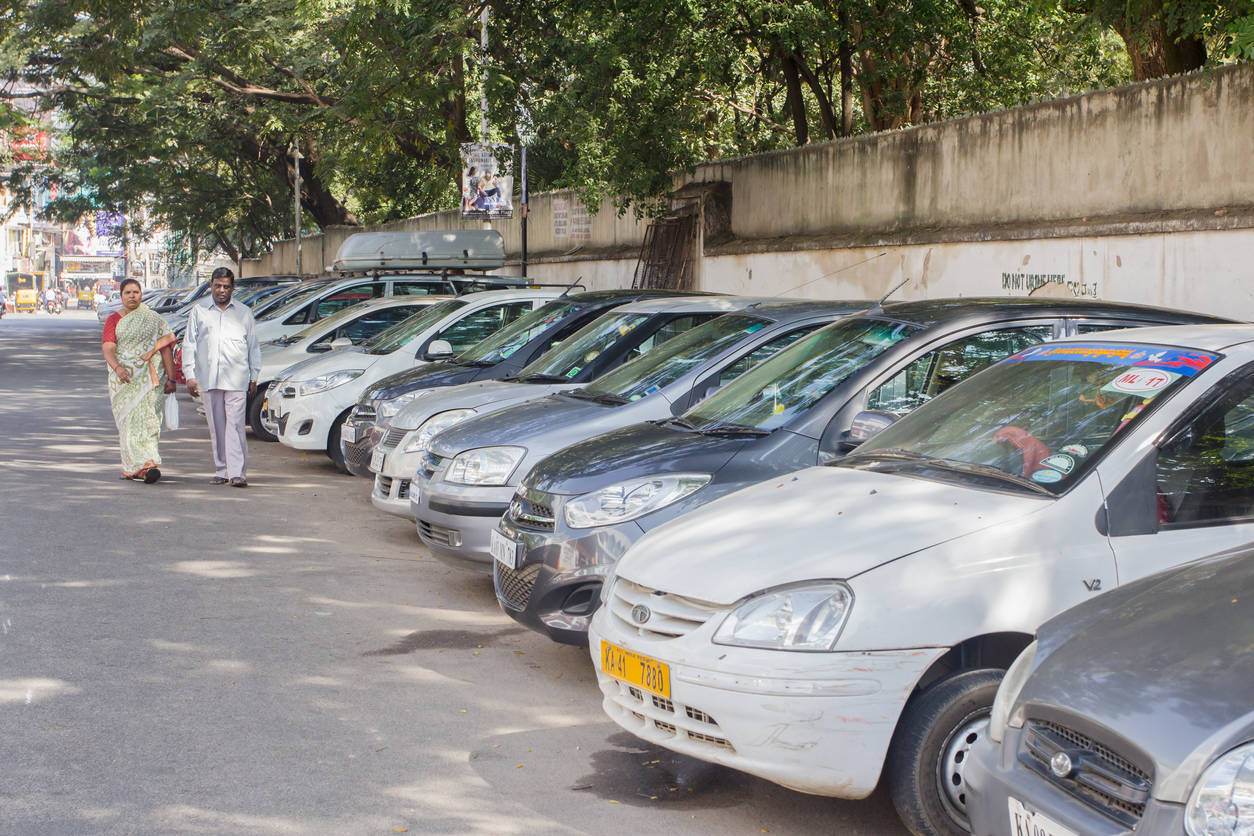 BENGALURU: The new Parking Policy 2.0 for Bengaluru, which advocates permits and fees even for those parking vehicles on streets in front of their house, has elicited mixed response from citizens. Meanwhile, the agencies concerned asserted that they are going ahead with implementing the proposals.

While one section of the citizenry has given a thumbs up to the policy, another says it is unfair to charge people for parking in front of their house as many residences are old with no provision to accommodate parking space.

Padmashree Balaram, a member of Koramangala 1st Block resident welfare association, said: “Residents should be charged huge amounts in case they are parking in public places or outside their homes. If a person can own an SUV, s/he can easily pay for parking.”

Nithya Reddy, a committee member of Langford Town RWA, said parking fee is a welcome step towards sustainable living. “Parking fee will reduce the number of people wanting to purchase cars and, over time, public transport needs to be given a boost to wean away people from private vehicles,” she said.

Anwar, a resident of Central Business District, said the proposal can be implemented in newly developing areas, not the already developed pockets. BBMP needs to find alternative spots for residents to park their cars, he said, adding: “Many citizens have already built their homes and these new changes cannot be implemented so easily. The government needs to find alternative spots for us.”

Sashikala Polisetty, secretary, Shantinagar resident welfare association, said people will get used to paying the fees, but wondered if things would improve. “If the government is working towards wholesome development then it should provide better public transportation with last-mile connectivity and alternative parking facilities,” Sashikala told TOI. 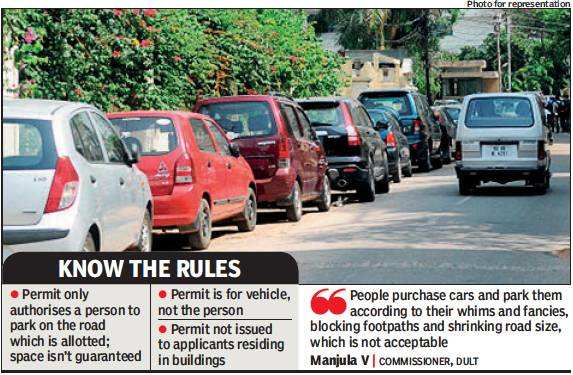 Manjula V, commissioner DULT, said people buy cars without thinking of parking space.“People purchase cars and park them according to their whims and fancies, blocking footpaths and shrinking road size, which is not acceptable,” said Manjula.

DULT is preparing the draft area parking plan for the city’s eight zones. “We have included all types of parking — on-street, residential and commercial. Prices will vary according to location,” she said, adding: “We are also offering monthly parking passes for the benefit of regular users of off-street parking.”

“We are working on the rates. If a person needs to park in front of his house, the rates per year will be Rs 5,000 for MUVs and SUVs, Rs 3,000-4,000 for medium cars and Rs 1,000 for small cars, while two-wheeler parking fee is yet to be decided,” another senior BBMP official said.

On a pilot basis

Manjunatha Prasad, BBMP commissioner, said the new policy will be introduced on a pilot basis in some areas. “We will also look for the nearest space and take it on rent and construct multi-level parking facilities so that residents can use them,” he said, adding that many things are being worked out.

“Residents will be allowed to purchase permits on a quarterly or annual payment basis. We will also be issuing an authorisation letter to park a car in designated parking areas,” Prasad said. 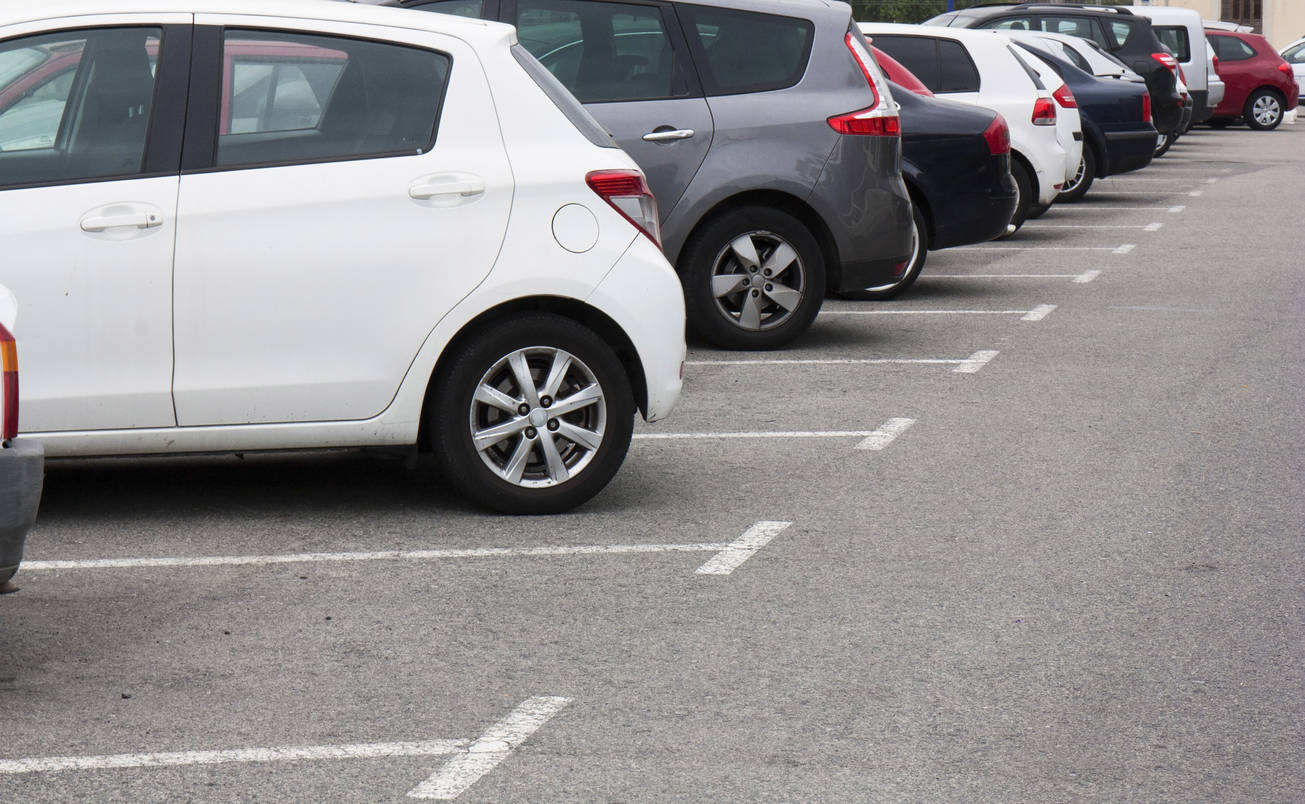 BENGALURU: The draft parking policy for Bengaluru — which proposes paid parking even in front of one’s house – was discussed at the state government-level on Tuesday. Chief Minister BS Yediyurappa reportedly spoke in favour of introducing such a system, while directing Chief Secretary TM Vijay Bhaskar to hold another round of meeting to resolve all “differences” before the subject is listed before the State Cabinet.

This is the first time the state government conducted a meeting exclusively on the parking policy, which was prepared by Directorate of Urban Land Transport (DULT) along with the Bruhat Bengaluru Mahanagara Palike (BBMP), early this year. The draft report was submitted to the state government after collecting inputs from citizens. Some of the proposals that were discussed include permit-based parking system in residential areas, ban on parking within 1-km radius of multi-level parking centres, on-street paid parking in commercial areas as well as mandatory parking facility before purchasing vehicles in the city.

Sources said there while there were differences in opinion on some policies, everyone broadly suggested the implementation of new parking policy.

SR Vishwanath, newly-appointed chairman of the Bangalore Development Authority (BDA), said the government is keen on implementing it.

“We have seen initial resistance from people but the city definitely requires parking policy. It could bring down the purchase of new vehicles as well as reduce the use of personal vehicles, all of which is a good sign. There will be further deliberations but we will go ahead,” he said.

The proposal for making parking facility mandatory for the purchase of new vehicles did not find consensus in the meeting as some felt the entire policy may never come into realty, if stringent regulations are introduced at one go. Sources said the Chief Secretary promised Chief Minister to hold a meeting and discuss the pros and cons of the new policy in detail.

DULT had made public the draft parking policy early this year. It has been broadly categorised into two parts. The policy allows parking on one or both sides of the road, depending on its size and locality.

It could bring down the purchase of new vehicles as well as reduce the use of personal vehicles, all of which are good signs­-SR Vishwanath, BDA chairman

Non-residential roads, which are less than nine metres wide, have been banned for parking.It also proposes permit-based residential parking system to regulate road side parking in residential areas. Permit will be given to building owners and associations whose buildings were approved on or before the date of issue of this policy. The permit, issued depending on the width of the road, will be valid for a period not exceeding one year. The policy had suggested creation of an area parking plan to fix the fee depending on the value of the land.Environmentalist DT Devare said the government should introduce parking policy and drop the transport cess it proposes to collect in the city.