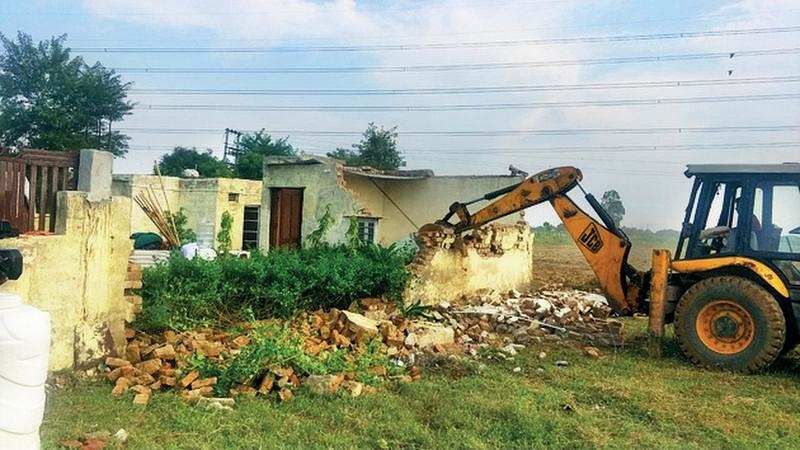 The enforcement wing of town and country planning department on Tuesday demolished five such illegal colonies. Several houses that are being built, a warehouse, a property dealer’s office and 25 other structures were razed by DTCP officials.

According to a rough estimate, there are around 250 illegal colonies being developed on over 500 acres of land across the city, mostly on the outskirts. The DTCP has been directed by the state government to demolish all illegal colonies and prevent efforts to develop such colonies again.

A few weeks ago, the enforcement team had carried out a survey and realized that these illegal colonies are being developed without applying for licences. Later, those have been issued notices with a warning that construction should be stopped with immediate effect.

District town planner RS Batth said during the survey, it was found that the developers of these colonies had sold 50-sq-yard plots to buyers through a property dealer’s office built on the land.

It is clear that the developers were targeting families of low-income group, which were looking for small residential plots, Batth told TOI.

He said a few families were already living on these plots and when the enforcement team reached the site to demolish their houses, they started crying and pleaded that they were unaware about the fact that these colonies were illegal. “We have spent our hard-earned money to buy plots, and once demolished we will be left with nothing,” one of the buyers told Batth.

Batth then tracked the contact details of these property dealers who sold plots to several families. “When I asked the buyers to call the property dealer and tell him that their houses were being demolished, he told them not to leave their homes and remain indoors so that DTCP will not be able to raze the structures,” said Batth.

He said this clearly indicates that dealers were cheating poor families. “We will file FIRs against the dealers and developers of these colonies and recommend strict action against them,” he said, adding that the property dealer has been directed to share the details of total plots sold along with financial details.